This post is an analysis of the May 2020 security vulnerability identified by CVE-2020-1054. The bug is an elevation of privilege in Win32k. The bug was reported by Netanel Ben-Simon and Yoav Alon from Check Point Research as well as bee13oy of Qihoo 360 Vulcan Team. I highly recommend viewing Netanel and Yoav’s talk from OffensiveCon20 Bugs on the Windshield: Fuzzing the Windows Kernel, which provides insight into how they found this and other bugs.

The remainder of this post will follow the steps I took to analyze the bug and write a proof of concept exploit targeting Windows 7 x64 (fully patched until Microsoft stopped supporting it).

Netanel and Yoav kindly provided crash code. This code was a great starting point and I did not do any patch diffing. Patch diffing can still be very useful under these circumstances, however I found it unnecessary in this case.

My first step was to rewrite the code in Rust and run it on a Windows 7 x64 box. Below is a snippet of the WinDbg bugcheck analysis:

The crash happens at win32k!vStrWrite01+0x36a on the instruction mov esi,dword ptr [r14]. Setting a breakpoint on this instruction yields the following:

It is clear that the crash occurs due to an invalid memory reference. This matches the WinDbg bugcheck analysis. CheckPoint Research tweeted about this vulnerability, describing it as an out-of-bounds (OOB) write.

I will work under the assumption that this value (fffff904'c7000240 in the crash) is what can be controlled for the OOB write. Note that the value c7000240 will be continually referenced to throughout the blog post. This value changes across system reboots and sometimes per program execution, however for the sake of continuity will remain the same.

The first goal is to understand how the address fffff904'c7000240 can be controlled, which will be referred to as oob_target. To accomplish this, the relevant parts of vStrWrite01 need to be reversed. Working backwards from mov esi,dword ptr [r14], r14 is set with lea r14, [rcx + rax*4]: 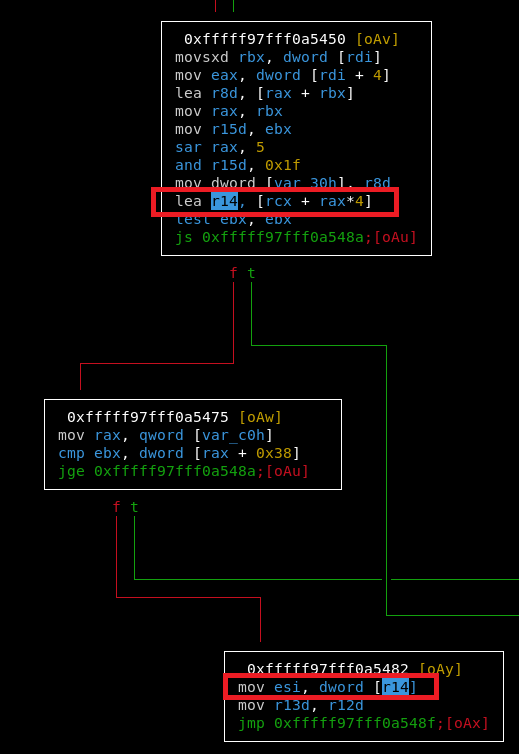 Working further backwards rcx is initialized in one of the first basic blocks of vStrWrite01. After that, rcx is manipulated in a loop: 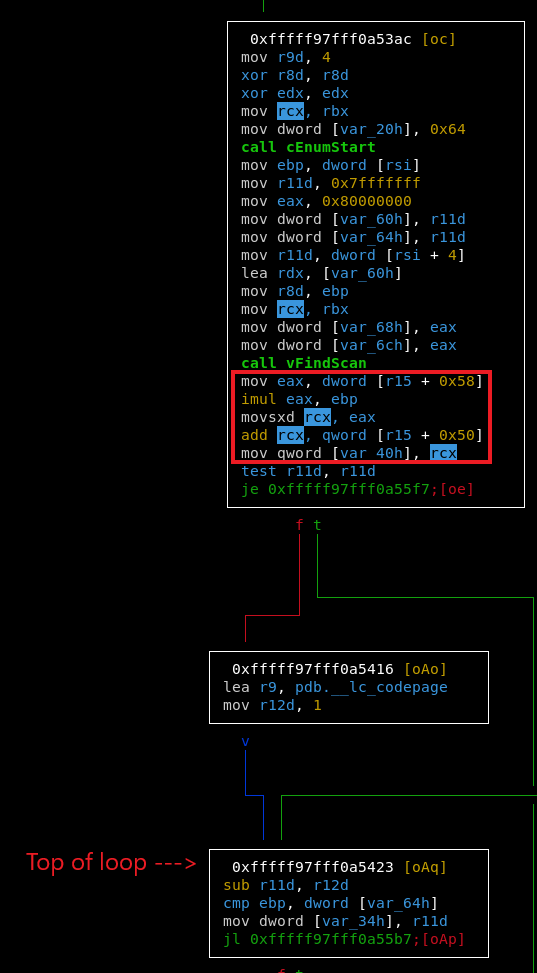 rcx is added to by a constant value in the loop. Looking at the assembly this is add ecx, eax. A psuedo-code loop snippet:

With this information a rough formula arises for oob_target:

The next logical step is to determine what controls the number of loop iterations. Reviewing the assembly, ebp is set via the following instructions:

fff2aaab is not identical, but it gives the feeling that it is related to arg5 of DrawIconEx. Changing the value from 0xfebffffc to 0xfebffffd:

The result is fff2aaac. This indicates that it is related.

eax in the oob_target formula is set via an offset from r15: 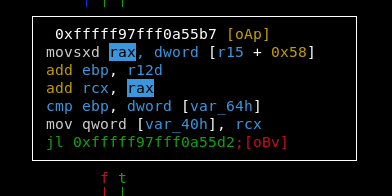 Offsets from r15 are commonly used in the beginning of vStrWrite01. This indicates that r15 could contain the address to some structure. In the second basic block of the function r15 is set as follows:

r15 is set to arg2 of vStrWrite01. Dumping arg2 at the start of the function:

The two red boxes mark values that are known. The first red box is arg1 (bitmap width 0x51500) and arg2 (bitmap height 0x100) passed to CreateCompatibleBitmap. The second red box marks a value, c7000240, that has been seen multiple times. This is the lower 32 bits of oob_target. Lastly, the blue box marks eax in the oob_target formula.

The above memory layout within the context of Win32k bitmaps may look familiar, and indeed it is two adjecent structures, BASEOBJECT and SURFOBJ, that are well known in Windows kernel exploit development. In other words, the first red box is SURFOBJ.sizlBitmap, the second red box is SUFOBJ.pvScan0, and the blue box is SURFOBJ.lDelta. More information on these structures is available here. This is a critical piece of information that will be utilized later.

The next step, however, is to fully understand how iterations from the oob_target formula is controlled via arg5 of DrawIconEx. Determining this information follows a similar process as used above, but with additional steps. For this reason, only the results will be shared. The relevant function, vInitStrDDA in the notes.txt file of my GitHub repo contains extra detail.

What was discovered was that arg1 of CreateCompatibleBitmap and arg5 of DrawIconEx directly control the values of both loop_iterations and lDelta. However, the lower 32 bits of oob_target always remain the same. This means only the upper 32 bits of the write address are controllable.

The next step is to determine what is written and to what extent it can be controlled. Reviewing the assembly of vStrWrite01 two writes can be performed:

The content of esi is determined by either of the following: 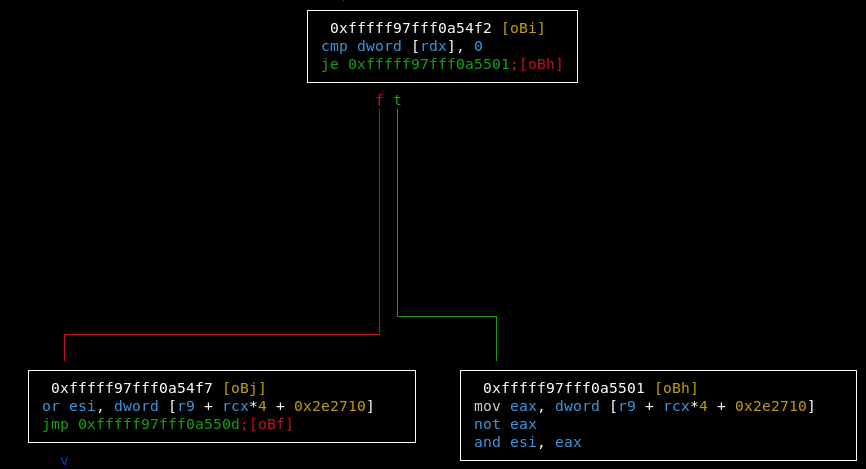 esi is either bitwise OR’d or bitwise AND’d with some value.

Using this call to DrawIconEx the path to the bitwise AND is always taken. Because esi is set via bitwise operations, the diFlags (arg8) parameter of the DrawIconEx stands out to me. The current call sets this parameter to 0x6. Reviewing the documentation for this flag shows that 0x6 is equivalent to DI_IMAGE which “Draws the icon or cursor using the image”. The flag DI_MASK sounds promising, and sure enough setting diFlags (arg8) to 0x1 changes execution flow to the OR branch.

Now that the capabilities of the OOB write are understood it is time to develop an exploitation strategy. The capabilites are a far cry from an all powerful write-what-where, however in situations like these I like to recall that it is possible to exploit a single byte NULL overflow.

At this point I strongly suggest reviewing/reading Abusing GDI Reloaded and Abusing GDI for ring0 exploit primitives. A brief explanation of these papers follows.

The SURFOBJ struct contains useful members such as pvScan01 and sizlBitmap. pvScan01 points to the actual bitmap data. This data can be read/written to using GetBitmapBits and SetBitMapBits. sizlBitMap is two dwords that contain the height and width of the bitmap. Clasically, two SURFOBJ structures are utilized. A write-what-where is used to overwrite the first SURFOBJ’s (referred to as Manager) pvScan01 with the value of the second SURFOBJ’s (referred to as Worker) pvScan01 address. This then allows a reusable/relocatable write-what-where primitive. The capabilities of this OOB write are listed as:

Obviously this does not meet the classical requirements. Fortunately, there is another option taking advantage of sizlBitmap. On Windows 7 (and older versions of Windows 10) the SURFOBJs and their pvScan01 member contents are laid out contiguously. This means that if it is possible to increase either the width or height of sizlBitmap it will be possible to write out-of-bounds of the SURFOBJ’s pvScan01 using a call to SetBitMapBits. If a second SURFOBJ is allocated after the first SURFOBJ, this object’s pvScan01 address can be overwritten. This second SURFOBJ can then be used via SetBitMapBits for a powerful write-what-where primitive.

Taking all the information learned up to this point a rough exploitation strategy can be formulated. 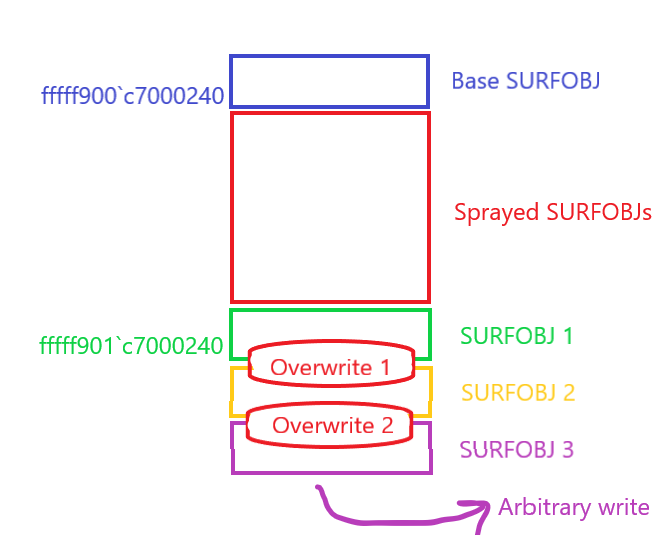 Every step is easily accomplished with the exception of step 3. The ‘what’ part of the write is not a problem. As seen earlier it is possible to perform a bitwise OR. This is guaranteed to increase the OR’d value, which is what is required. Accurately targeting width or height of sizlBitmap is the challenge. It may be recalled in the start of the blog post oob_target is set via lea r14, [rcx + rax*4]. Up to this point, rax has been ignored. Now that an attack strategy is created, it is time to see how rax can be controlled to grant greater control of the OOB write.

Testing different parameters of DrawIconEx revealed that arg1 determines the value of rax. rax is then divided by 0x20: 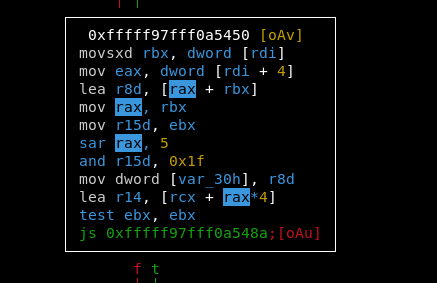 Testing arguments to DrawIconEx with breakpoints on both mov dword ptr [r14],esi instructions also uncovered useful information. arg2 of DrawIconEx controls the number of iterations through a loop where writes are performed on the bitmap data. For example, if 0x5 is passed as arg2, then 0x5 sets of writes are executed: 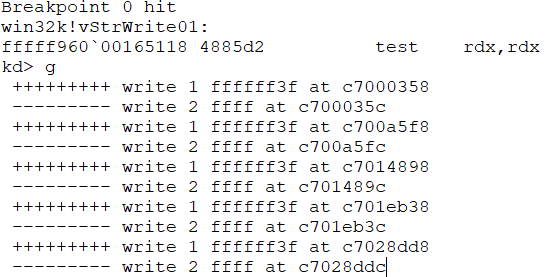 The difference between sets of writes is equivalent to an earlier variable, lDelta. This can be written in psuedo code as:

This can be bruteforced with ugly Python:

Now that all values are understood, all that remains is to write the exploit code.

Exploitation code is available on my GitHub. Demoing the exploit:

Testing the exploit on Windows 7 has proved to be very reliable. However, there is room for improvment to make memory calculations completely generic. While testing, I found that a certain Windows KB modified the SURFOBJ struct slightly. Essentially, instead of the offset being 0x240 it is 0x238. Within the exploit code are 2 comments that mark what value to use depending if the Windows 7 host is pre- or post-KB. I have narrowed down the KBs and will update with the exact KB later.

Thanks to Netanel Ben-Simon, Yoav Alon and bee130y for finding the bug: